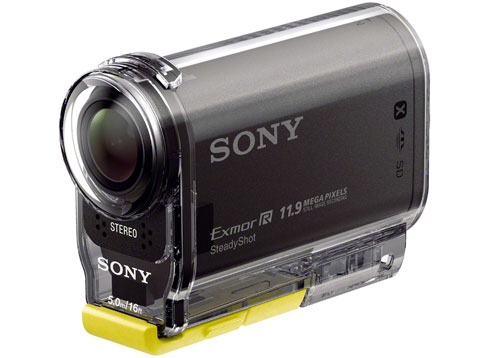 After much deliberation over a couple of days I bit the bullet and grabbed a Clearance Sony HDR-AS20 from JBHiFi. This new camera should be a nice partner to the GoPro Hero3 Black I’ve had since 2013.

The tip-over point for me was being able to buy a great camera with good optics and some image stabilisation at a low price (AUD149) which has a similar array of accessories to the GoPro but isn’t a GoPro.

The HDR-AS20 isn’t a new camera and certainly isn’t a super high-spec unit either.  Instead it’s a case of getting a better camera than a GoPro clone at a GoPro Clone price.

Some of the accessories are also a bit more flexible or innovative compared to GoPro as well.  There’s a housing that converts it to being a lot like a mini-camcorder (AKA-LU1 for AUD99) and the remote features a Live View screen for around the some price and the GoPro equivalent.

Like my GoPro Hero3 most of the housings and accessories are compatible with the later (more advanced) models, which means in a couple of years I may take the leap to 4K recording with either camera family and not ‘lose’ out on the investment.  I do feel that 1080P is going to be good enough for quite some time though as the storage and recording media demands of 4K exceed my budget.

Included in the basic kit are the obvious things like USB Cable, Battery, Mounts and a few stickers.  I was surprised at the inclusion of a AUD15 Voucher for Accessories from Sony Australia and an adapter to convert to the popular GoPro style mounts.

The HDR-AS20 is simple to use – like a GoPro – just preset the finer configurations then cycle between modes as needed. It seemed to have no issues with my 80Mb/s Sandisk Ultra 64Gb card and should record around 5.5 hours of video on it.  I’m not convinced that the iOS Apps are as good as they should be be, they aren’t as “comprehensive” as the GoPro App.  However the video “preview” via the Sony App is far superior to the GoPro with minimal lag and better clarity.

The standard housing is rated for 5m depths so will do the trick for snorkelling, pools and playing about on the water – this is not as good as the basic GoPro housings but enough for most of my potential use.

The lens optics and stability of image seem better than my Hero3 Black. Although with fewer modes to deal with the wide-angle distortion at recording time it may mean post-processing video will require a few more tweaks.

I did pick up a few additional accessories at the same time, the Skeleton Housing for in-car use and a Hand-Grip/Tripod which I hope will be handy.

Thanks to the included voucher I’ll probably end up ordering the AKA-LU1 this week.  I’m hoping when combined with some additional Wasabi Power batteries that will be “enough”.  The Live Remote will have to wait until the right deal comes along!