The Gunning Fireworks Festival is not a new thing, having been held for some 10 years as a trade display before becoming a Community festival in 2010.

The 2014 Festival was our 2nd, we were captivated in 2013 and after looking at our hand-held footage from the Lumx FT3 and iPhone knew we could do better in 2014.

All about this year:

So last Saturday (13th September 2014) we rugged up and headed out to Gunning.  It’s a 45 minute drive on typical rural Australian roads.  single lane in each direction, potholes and roadkill to remind you of the dangers of the road at night.

We found the Gunning Showground bustling with people enjoying the sideshow amusements.  A stop at “Ze German Hut” for a Bratwurst in a roll was mandatory before finding a ringside location.

When I saw ringside I mean about 75-100m from ground zero of the displays.  You don’t so much as watch the Fireworks as sit inside the display.  As with 2013 we started out behind the VIP area.  The crowd filled in around us and we waited for 18:30 when the action was to begin.  The photos don’t do the sheer volume of fireworks on the Showground justice.

As darkness falls the anticipation builds and then it’s on.  One by one single shots are fired, each announced by name; “Shot 5, 4 inch giant red ring” this continues for well over one hundred shots, some made up of hundreds or thousands of individual fireworks.

After the trade display is done there’s a pause while the setup for the finale is completed.

Then it starts.  The finale display is amazing, it’s almost too close, the crowd is coated with falling ash and debris, an occasional still light piece falls still lit and fizzes about the feet and stamped out.  The “pooh” and “ahhhh” continues, a monsoon of fire.  Yes we’re so close that the human field of vision can’t take it all in, we’re so close that with each massive mortar explosion we can feel our organs compress.

And then, in a crescendo of explosions it’s over and we start to shuffle out.

There’s just one stop to make.

The last Kransky of the night, sustenance for the drive home.

Once I edit up the video I’ll link it here! 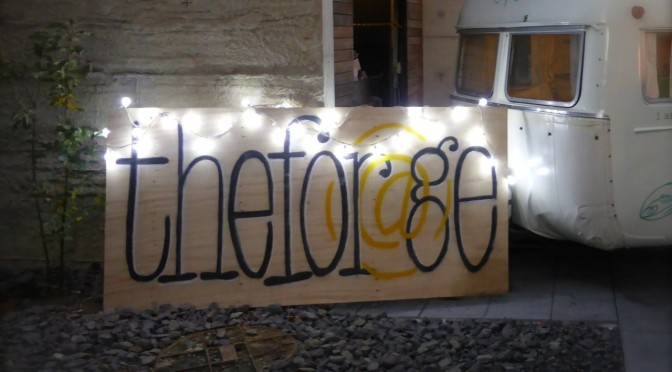 Hitting The Forage in the depths of Canberra winter is a cool experience, not only is the biting winter chill fighting through the layers of clothing but only the hippest folk in Canberra get out to these sort of events.

There’s a lot of that cultured hipster feeling that Canberra seems to do so well, the carefully manicured appearance of thrift and alternative so that it’s “an individual” yet someone exactly in the pattern locals are used to expecting.

Sure the battle for parking around the New Acton precinct can kick the evening off with a frustration – surely driving on the correct side of the road and following a few arrows isn’t that hard Canberra?   However it’s nice once you’re in.  Our first stop was the Peruvian Chanchito stand, my first introduction to such a beast and hopefully not my last.  At $12 for a good sized (1.5 hander) burger heaped with pork belly and slaw, between a slice of sweet potato and a rustic roll it’s big on flavour providing ample fuel to ward off the cold.

We boosted our our inner warmth unloading a closet of rarely used blankets to the Vinnies Winter appeal, sadly it seemed so many of those hipsters among us forget the struggles of some and shied away from donations, be that of coin or warmth.

For the organisers there’s no doubt the formula worked, can it be repeated through the year as intended?  Only time will tell.