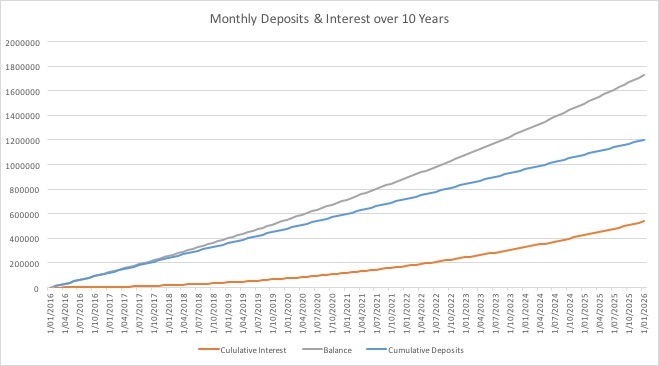 How hard is retiring in your 30’s?  Really?  Back in February 2016 the Australian press hit upon the GoCurryCracker duo and their success at living the early retirement dream.

Since then my far more financially savvy (and world travelling) colleague and I have been breaking down the story and working out the true critical factors to the GoCurryCracker (GCC) success story.  Sure we may be a little jealous, but we’ve tempered that admiration of a couple who were lucky enough to be in a position to create such a scenario.  The GoCurryCracker Blog is worth reading from the start if only to clear some of the misconceptions from news articles.

Can Australians Repeat the GCC Story?

Yes.  While it would be flippant to say that “anyone” could do it there is no barrier preventing people from following the example set.

WAIT! you haven’t talked about the income you need in retirement!

The above chart is based on some very ideal circumstances but with an annual growth of 7% (this has been the average return of the Australian “market” over more than 100 years) and a high deposit rate of AUD10,000 per month it’s still a minimum of 5-6 years before you could before you could be retiring in your 30’s.

How is this relevant to saving?  Savings have to come from post-tax income levels  as do your living expenses, so you need to understand what you’re working with.

The quickest rule of thumb is to simply live as a frugal average income earner and put all additional earnings into savings.

An average household saves about 5% of it’s income (AUD3,100 of the post-tax AUD62,000 income) so that in addition to the difference between your AUD135,000 post-tax income means you should be targeting a minimum of AUD6,300 per month of savings while living on less than AUD4,900 per month.

In this chart (above) I’ve plotted the AUD6300 monthly savings again at our market average of 7%.  However I’ve also added in a comparison to the AUD260 a month thats saved by the “average household”.

If that’s not an incentive to save nothing is!