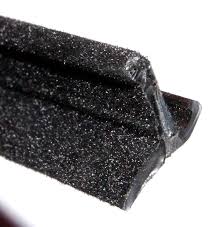 One of the most common complaints with late model cars are door noises like creaks, squeaks or rattle noise from the doors.  It can sound like a “crack” when crossing driveways and often can often get worse after the car is detailed.

Once the usual suspects like loose and broken trim are ruled out dealerships and workshops are often at a loss to explain the noise let alone remedy it.

The noise we hear is actually caused by part of the door seals design and material that’s meant to reduce noise!  When you look at your door seals you’ll see they are made up of a number of parts.  The main cause of the noise is the outermost “flap” that serves to reduce wind noise and also act as an initial barrier to dust and water.

On the inside the seal has a “flocked” or “felted” finish which is the cause of the noise.

Why?  Well I’ve heard a lot of reasons and the most common is that as manufacturers strive to reduce costs of cars the quality of finishes like these suffer, this results in the fibres not being as long, plush or effective as intended.

Instead the fibres stick and release with movement of the door.  This appears to worsen after waxes or sealants are applied to the paintwork in the area of these seals.

How do we address it?

There are a number of products of varying prices that can used for the job.  My preference is for a simple Paraffin Wax stick which does the job, costs next to nothing and doesn’t have any risk of marking clothing or hands if touched.

Really when deciding on a product you want two things – a “dry” finish and a product that doesn’t mark or discolour clothing when brushed against.

Gummi Pflege, Teflon Sprays, Dri-Lube, Silicone Sprays all will work – however they only last 3-4 weeks.

My goto is Goss Dri-Lube, a stick of paraffin wax that is applied much like a crayon

As you can see in the photo I’m applying a generous layer over all the flocked parts of the seal.  In warm weather the whiteness “melts” away quickly eating the fibre and stopping the creaking door noises!

But what if that doesn’t work?

While in most cases lubricating the flocked door seals will resolve the door noises there are cases where it doesn’t work.

Bentley has this particular issue on some models which is resolved by adding lubrication under the seals where they attach/fit to the door.

What about a permanent solution?

The most cost effective solution thats likely to last long term is to apply a Teflon tape around the door openings where the flocking contacts the body.

The recommended tape is 3M “5430” Squeak Reduction Tape which is best described as specialised and has a specialised price tag of AUD187 for a 33m roll of 25.4mm width.