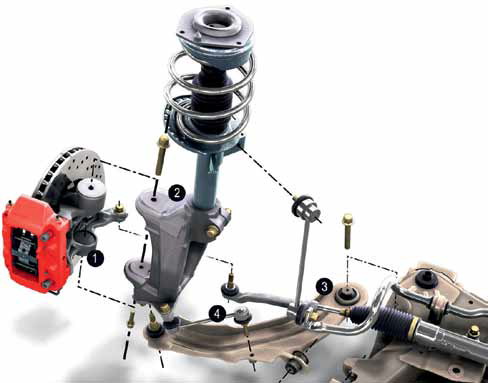 Perfohub is the magic front suspension design that Renault developed to separate the drive and steering axis of their the Megane RS.  Otherwise decribed as the “Cup” suspension option and usually paired with an LSD and Brembo 4-spot front brakes.

Otherwise known as a “double-axis” strut system the basic principle has been used by Ford, Opel and Renault on their pinnacle hot-hatches to resolve some of the negative handling characteristics of hight performance front-wheel-drive systems. 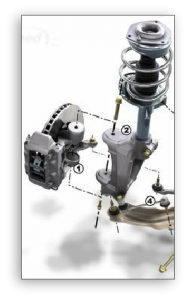 For buyers of special editions such as the Mk3 Megane GT220 there’s no choice to tick the “Cup” box so we get what Renault provides, a well tuned combination of conventional strut hardware and all that goes along with it.

These pages are the compiled parts lists and technical drawings to show the parts required for retro-fitting the Perfohub suspension, the swap has already been done by other owners – however they have used complete (used) RS265 subframes to achieve the swap.

I’m approaching writing this as the owner of a 2013 Megane GT220, a chassis that already has a lot of RS265 DNA – the brake master cylinder is the same as the Brembo equipped RS265, the gearbox and engine are the same and so on.  If you have a different model you should research further.

On the following linked pages I’ll cover off the parts that make up the Mk3 Megane GT220 and RS265 front suspension packages along with the diagrams from Renault Dialogys.