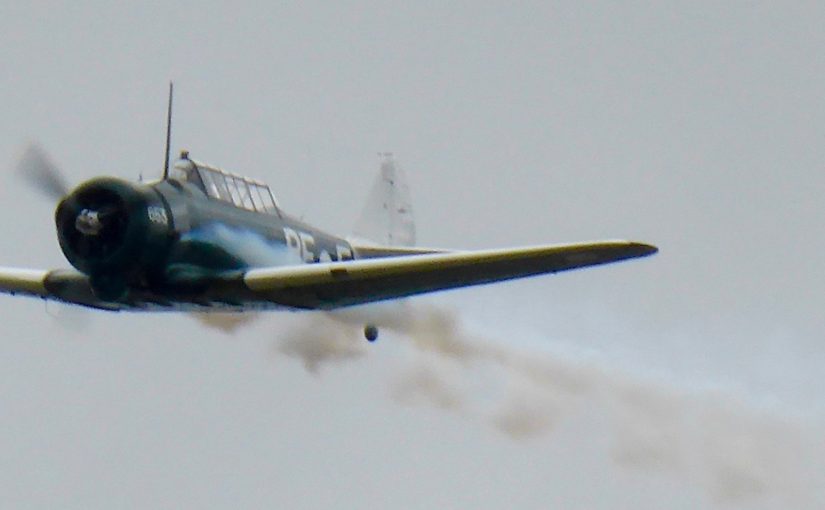 Thanks to the overcast weather on the day I didn’t have a great deal of success shooting video with the TZ40 at Temora.  The combination of grey skies cloud and cold weather (the latter giving me the shakes) reply hampered the flying videos. 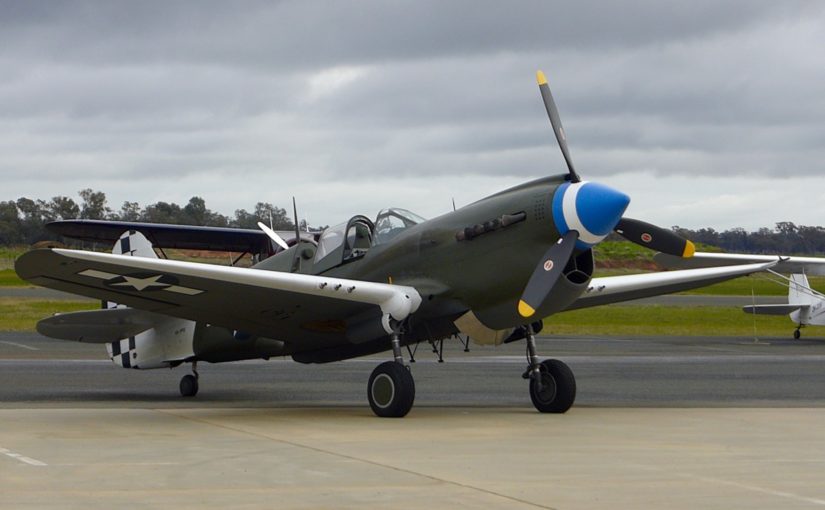 On the 2nd of July 2016 I jumped into the car and we went out to the Temora Aviation Museum.  It’s not the first time I’ve gone and certainly won’t be the last.  This visit provided the opportunity to see the Curtis P-40 “Kittyhawk” fly END_OF_DOCUMENT_TOKEN_TO_BE_REPLACED

5:11am and the cheerful melodies of the alarm that woke me are a distant memory.  My feet hit the floor and it’s time to get a move on.  Looking out the window reveals the smattering of rain that’s fallen and the latest forecast looks more like I’ll become a human lightning rod. 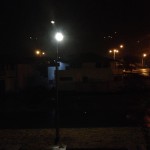 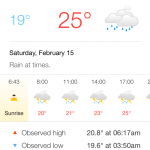 The 229km drive out to Temora from south Canberra takes about 3 hours to do at a leisurely pace, stopping for breakfast, comfort and naturally avoiding the attention of the NSW Police force.  Yes we’ve all driven further faster, but these days having a license and money in my pockets is more favourable.

After rummaging around throwing my untouched for 3 years camera gear back into the bag, stopping for fuel and generally getting myself conscious by 6:30am I was cruising.  There’s the obligatory stop for breakfast at the Yass/Hume Highway Service Centre for one of McDonalds fine breakfasts around an hour later.  I had a bit of a walk around, you know the classic “Stop Revive Survive” mantra while savouring the coffee from the same fine establishment.  Then it’s back on the road. 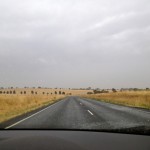 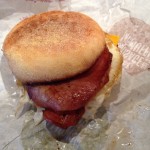 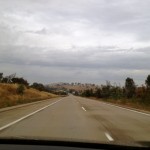 It’s just short of 9:30am as I cruise up Tom Moon Ave in Temora.  The gates to the carpark are open and there’s a few cars sitting forlornly in the rain.  It’s still another 30 or so minutes before we can enter the museum so I sit back and play with the trip computer.

The GT220 was never bought for hyper-miler performance, but it has proven to be very economical in comparison to my last 4 cars.  In fact its fuel consumption is on-par with the 2002 RenaultSport Clio, ironically adding considerably more size to the car and a turbocharger to the “same” 2L F4R base engine results in no change to overall consumption.  This is a great example of just how much silent evolution happens in the auto industry.  I’ve carrying around 400kg more weight, added more performance (50hp additional thanks to the turbo) and yet use the same amount of fuel!

The numbers are good but not stellar, but with the light rain and water on the road plus the rather undulating terrain I’m not about to complain.  The outward journey consumed about a quarter tank with a measured 229.2km travelled.  This was spot-on the Google Maps estimate of distance and the same as predicted by the Tom Tom Carminat system in the GT220.  More encouraging was the “Range” calculation showing an even 500km Distance to Empty.  Take away some of the more adverse conditions and I probably could bank on an easy 750km touring range.  This is an important consideration for future day-trips!

Finally the clock flashes up 10am and my fellow carpark lurkers and I spill from our rain sodden vehicles, gather our camera equipment and proceed into the Gift Shop/Entrance of the Museum.  $20 changes hands, I get my pass-out stamp and the days program of flying.

The Museum is broadly made up of 4 areas of interest; The Gift Shop and Information centre where displays covering both the aircraft and RAAF history are intermingled with museum restoration information, a “observation deck” that overlooks the main maintenance hanger so you can see aircraft being maintained (as opposed to the non-accessible restoration hangers), the main Museum Hanger where aircraft are displayed when not being flown, and finally the open-air benches and seating where the hard-stand, runway and flying can be observed from.  None of these areas are huge, so with the crowd diminished but he rain I’m able to move around freely and attempt to reacquaint myself with my old Canon 300D.

By now it’s clear the weather is going to get the best of the day.  There will be flying but there’s eagle eyes poised over the weather radar and flights will be low-level and low-speed to minimise aircraft damage.

That was something new I learnt, historic aircraft aren’t flown in the rain because the impact of water against the surfaces strips the paint!  The weather remains closed in, but the museum crew continue to ready aircraft while the small crowd rotate through the hangers and the open areas.

There’s plenty of time to take photos of todays demonstration aircraft between the rain squalls.  The Supermarine Spitfire Mk8, CAC Boomerang and Lockheed Hudson are prepped and fuelled in front of us. 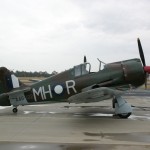 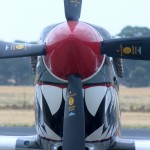 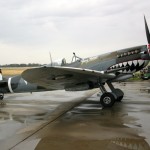 At last there’s a break in the weather and the CAC Boomerang takes to the air.  Shortly after the Boomerang returns the Spitfire takes off and gives us a unique demonstration of low-speed flying.  Normally (on a clear day) the Spitfire is flown more in line with its reputation for speed and agility, so in a way this is a refreshing change.   A break follows while the weather clears enough for the Hudson to take-off.  5 minutes becomes 15 which becomes 30 but eventually the rain breaks and the Hudson is up.

While the 300D and I struggled to get our groove back the iPhones video ability did allow me to capture the engine starts quite clearly.  Once in the air the 300mm telephoto was brought into play, the now 10 year old 300D was never going to cope well in the weather and my lack of recent experience didn’t make things better.  While I fumbling with settings I’d occasionally get a good short and ruin 20 others by forgetting to switch those same settings back! 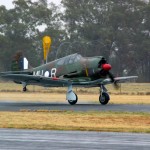 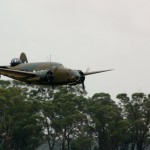 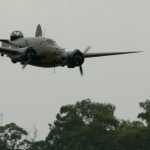 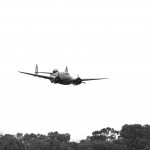 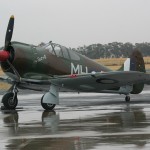 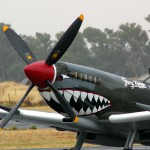 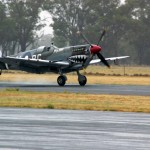 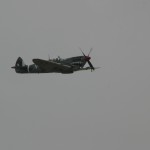 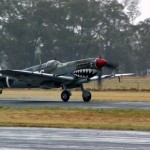 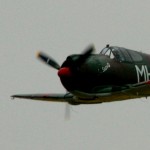 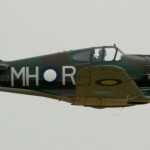 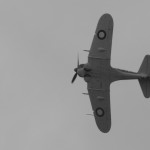 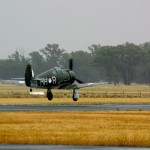 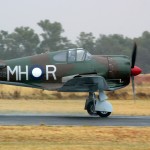 By 2pm the flying was over and the aircraft moved to the maintenance/engineering hangar for us all to get up close.  A bit more wandering around and finally it was time to make another pass through the giftshop before heading back to Canberra.

The plan for the return trip was much the same, use the same route, expect it to take 3 hours and generally stay out of trouble.  Pulling out of the Museum carpark at 2:30pm and crawling through Temora until hitting the open road I was immediately surprised at the massive increase in traffic.  The constant rain had led to a build-up of standing water, the road sections depressed through constant heavy vehicle use were now 20mm deep channels of standing water, the crown of the road and centre of each lane forming the “dry line”.

An insipid version of McDonalds coffee at Yass/Hume Highway Services – why is it that some McCafes still can’t make an average quality coffee? – before the final leg back to fill the tank and see what our real world economy was. 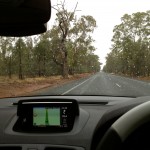 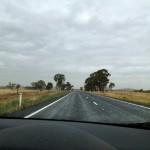 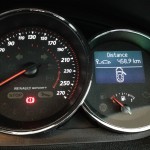 Door to door we covered 458.9km and burned a total of 34.71L of Shell V-Power.  My fuel use spreadsheet tells me this equates to 7.56L/100km.  The trip computer was showing an average consumption of 8.7L/100km and a Range of 320km.  I’m overall happy with that, pushing through water on the road and having a number of quite-low to quite-high speed runs overtaking on undulating terrain was never going to deliver diesel shaming economy.