Included in “the box” are recipe cards for the ingredients, they’re also available online at their website in PDF format.  This is our second meal from “the box” after the North African Lamb Tagine posted previously.

The recipe is simple enough and in some ways hardly imaginative but was also the first meal where we needed to supply some of our own “pantry items”.

Pepper Crusted Steak with Warm Potato Salad brings a few more parallel cooking functioning into play.  While the oven roasts the quartered chat potatoes a pot simmers away ready to blanch the sugar snap peas just before serving.  Meanwhile the steaks (a rather thin piece of rump) gets a single side coating of crushed peppercorns before hitting the pan.

The instructions are very clear and provide incremental timings which deliver a good result.  To my taste the steak could have been a bit less “done” although this is more a function of thinner cuts then perhaps first anticipated by the HelloFresh crew.

Laying out on the plate the meal looks good with the vibrant colours of the salad contrasting the peppery char of the steak. 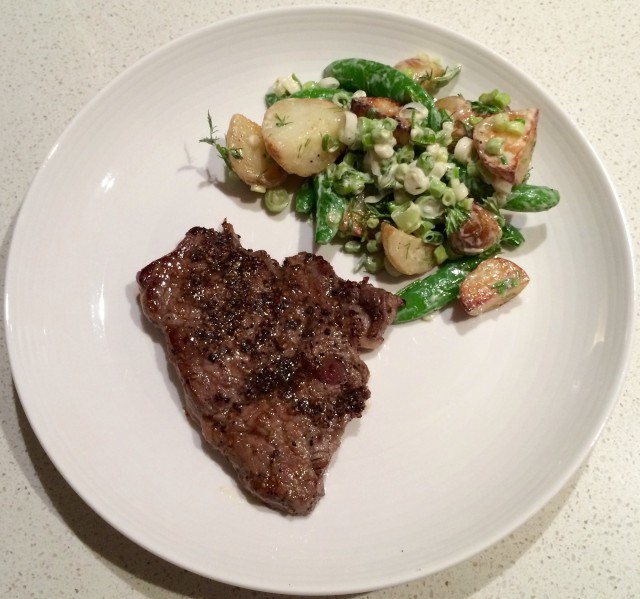 The warm potato salad is really the highlight of this meal, the steak itself was fine, but we all know what a piece of peppered steak is like don’t we?  The salad had crunch from the sugar snap peas, a little bite from the shallots and the aromatic dill carrying though the buttery smoothness of the roasted potato.

Some other reviews claimed there’s too much pepper on the steak but that’s something under the control of the chef so I don’t know why they ended up with more than they liked when they put it on in the first place!

In summary it was a good, filling meal that met with the expectation raised from the AUD11.50 per plate cost.  A minor downside was that the cuts of rump steak were not the best I’ve seen.