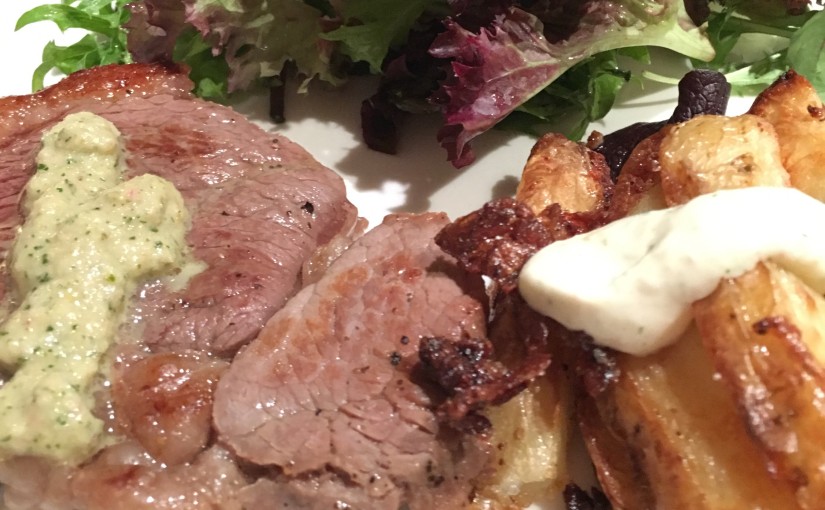 It wasn’t so long ago I was writing about our initial experiences with HelloFresh, the meal kit delivery people.

So perhaps it’s time for an update.

This week marks week 14, we skipped a week by accident, which isn’t hard thanks to the slightly confusing App view where you can pause deliveries. 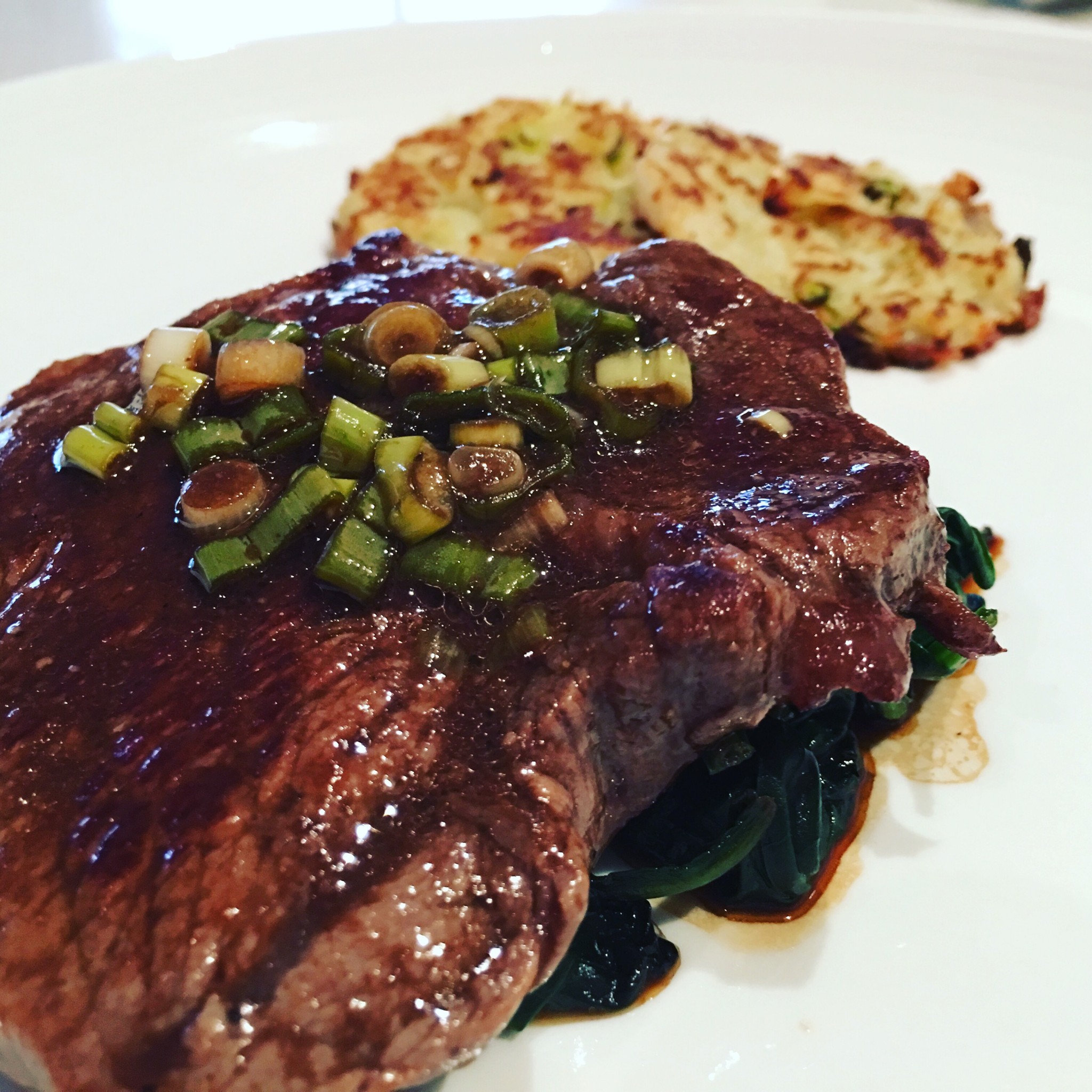 The meals themselves have worked out well in the most part, if you imagine getting 30+ fixed meals there’s always going to be the one that doesn’t quite match your desires.

However some consistent themes have emerged. 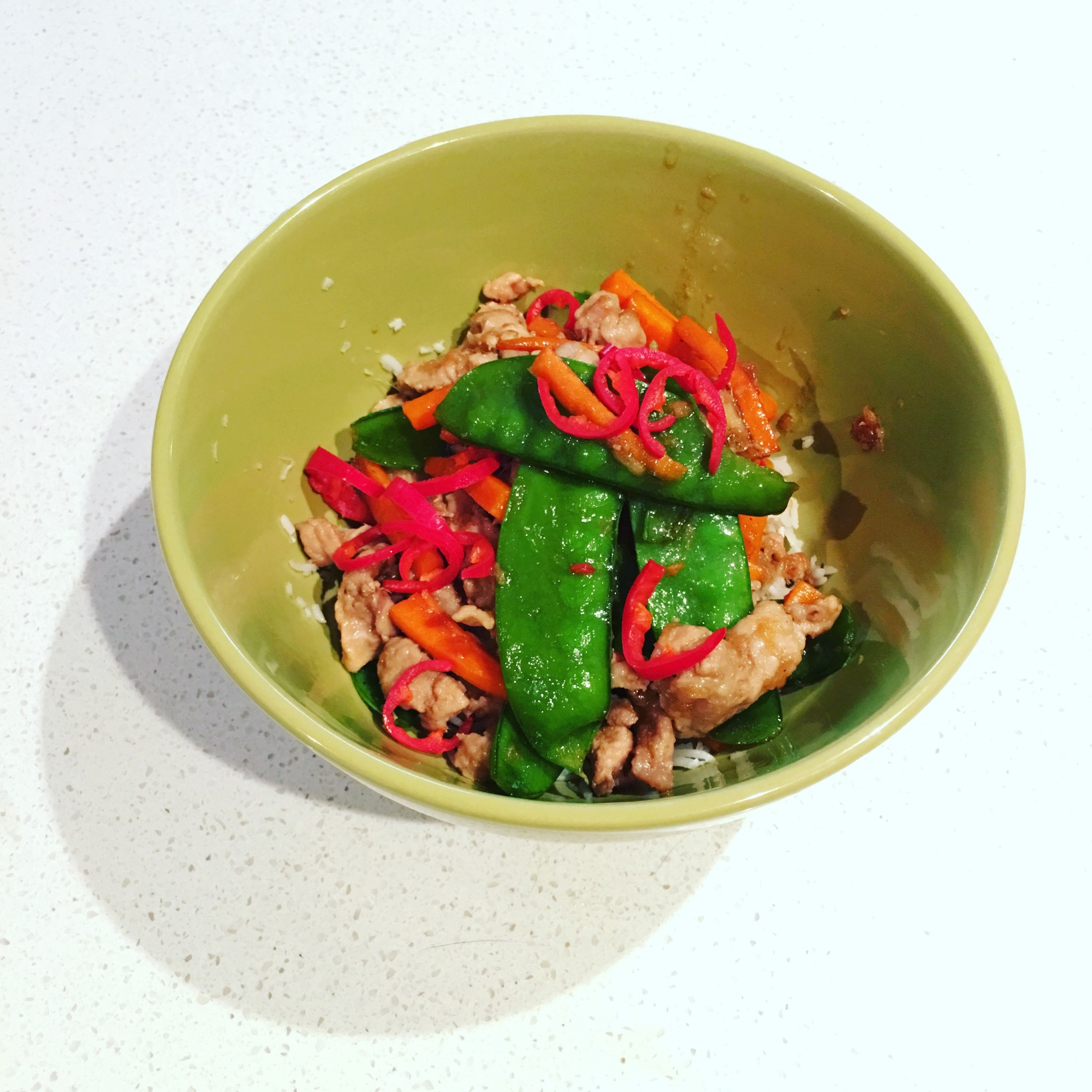 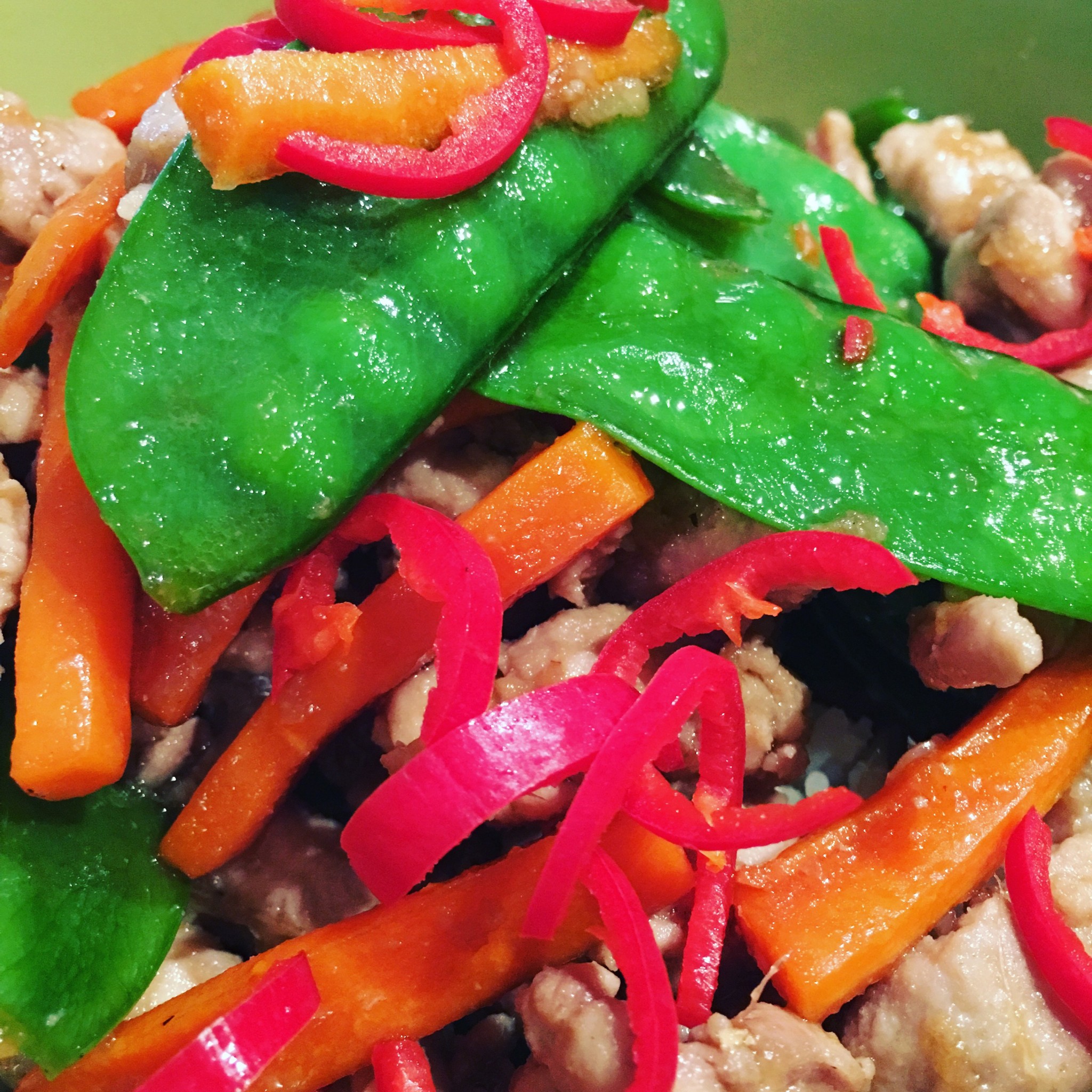 This is tough to judge, they remain easy to follow but, if I’m honest, I’m getting a little tired of the end-result photos being impossible to achieve via the recipe.  All the pictures on this page are of meals I made, and thanks to the magic of the camera look great, but somehow the pictures the HelloFresh team put up just don’t reflect the instructions.  Small thing but it does lower your self esteem a bit when you can’t get a result close to the #FoodPorn they promote.

Generally though they’ve been good, there’s been a few “too hot to handle” and a few “so bland it’s a shoe” but I could probably do some more work to mitigate this myself! 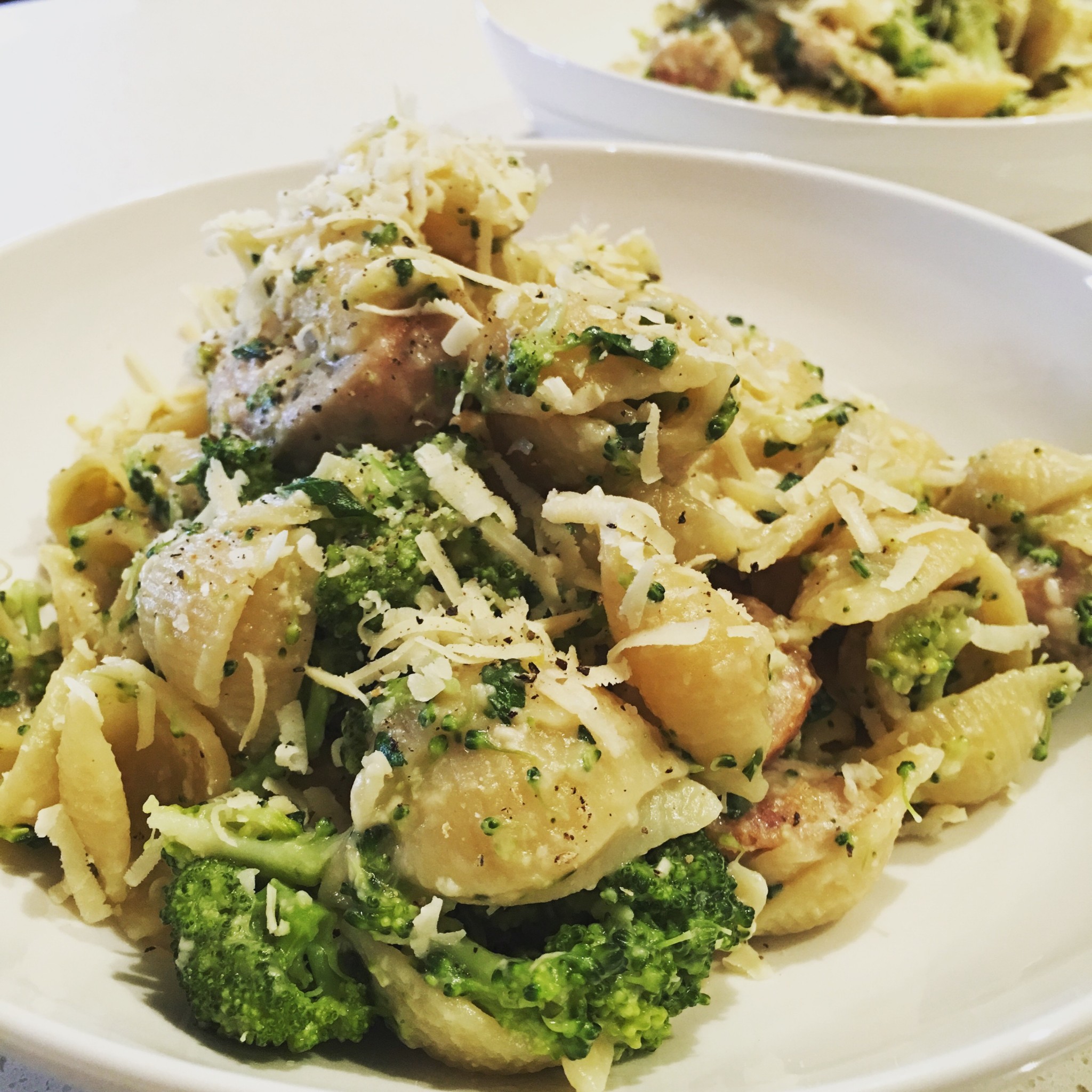 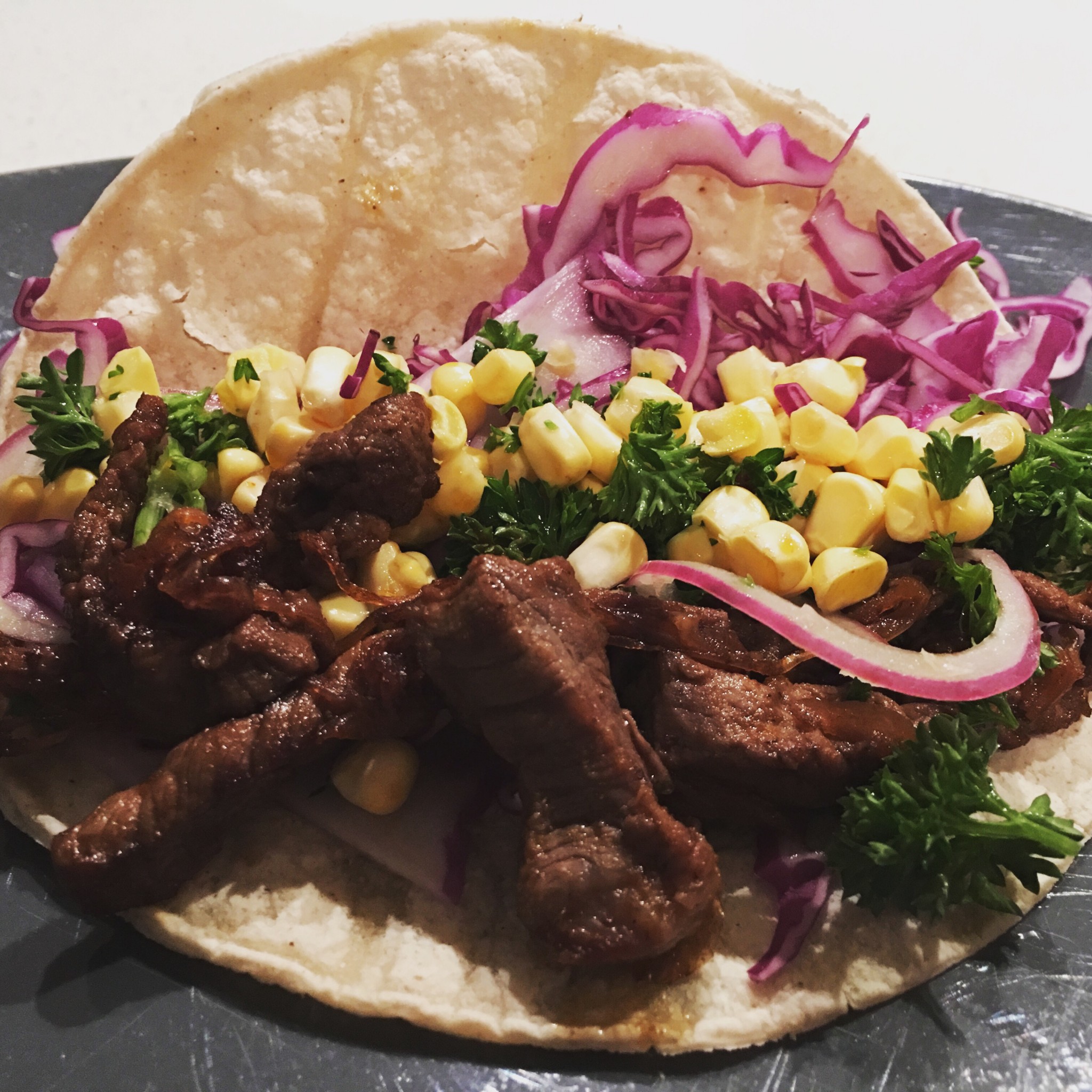 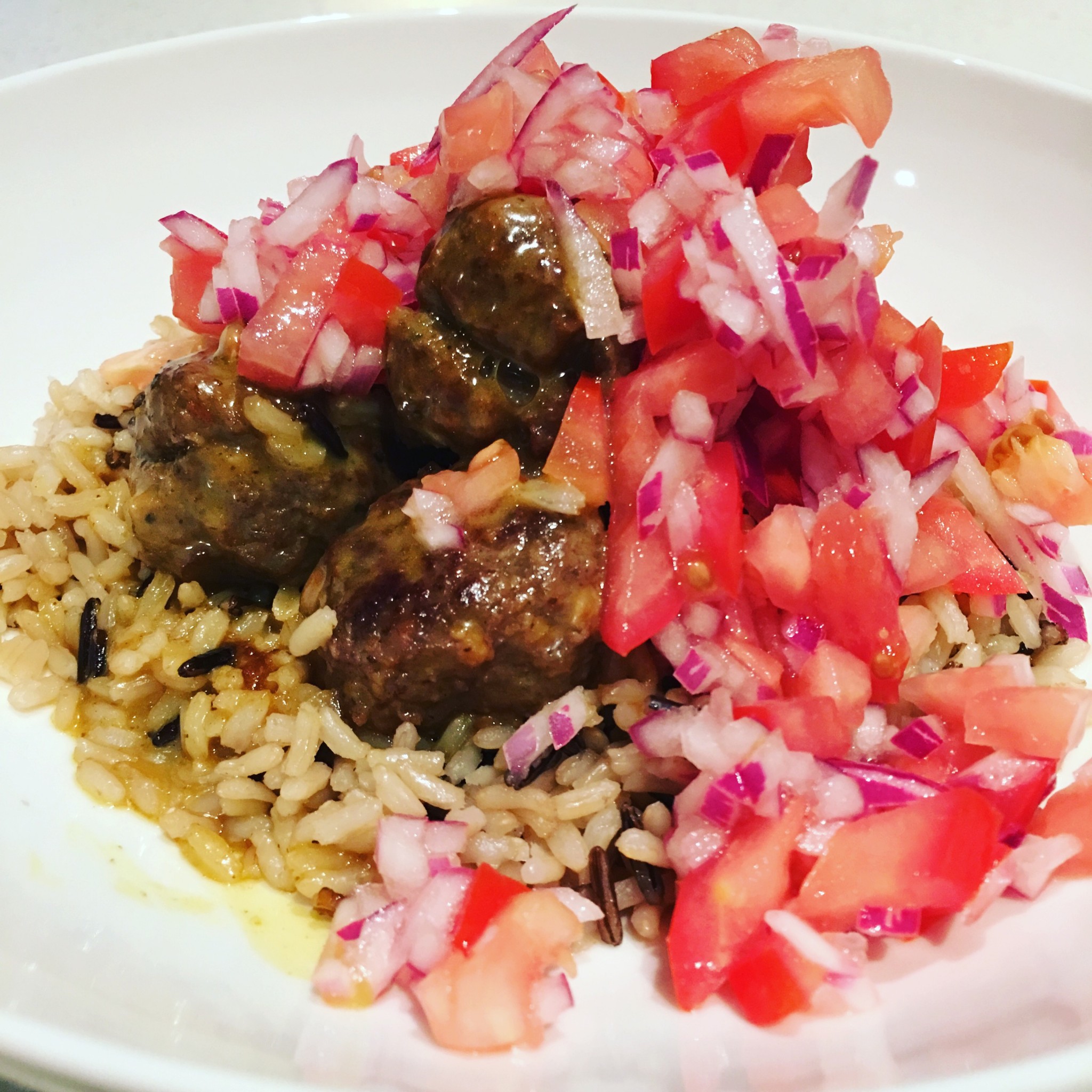 The meat quality is generally good, the chicken while often short dated has never failed to be excellent.  The pork has also been great, with well cut portions and not much fat.

The beef on the other hand tends to always resemble those cuts that the butcher offers as part of the cut price BBQ pack, and tends to be grisly and tough.  Sometimes I’d thought it had had a romantic moment with Edward Scissorhands – if you get Rump steak in your first box it’s likely to not impress much. 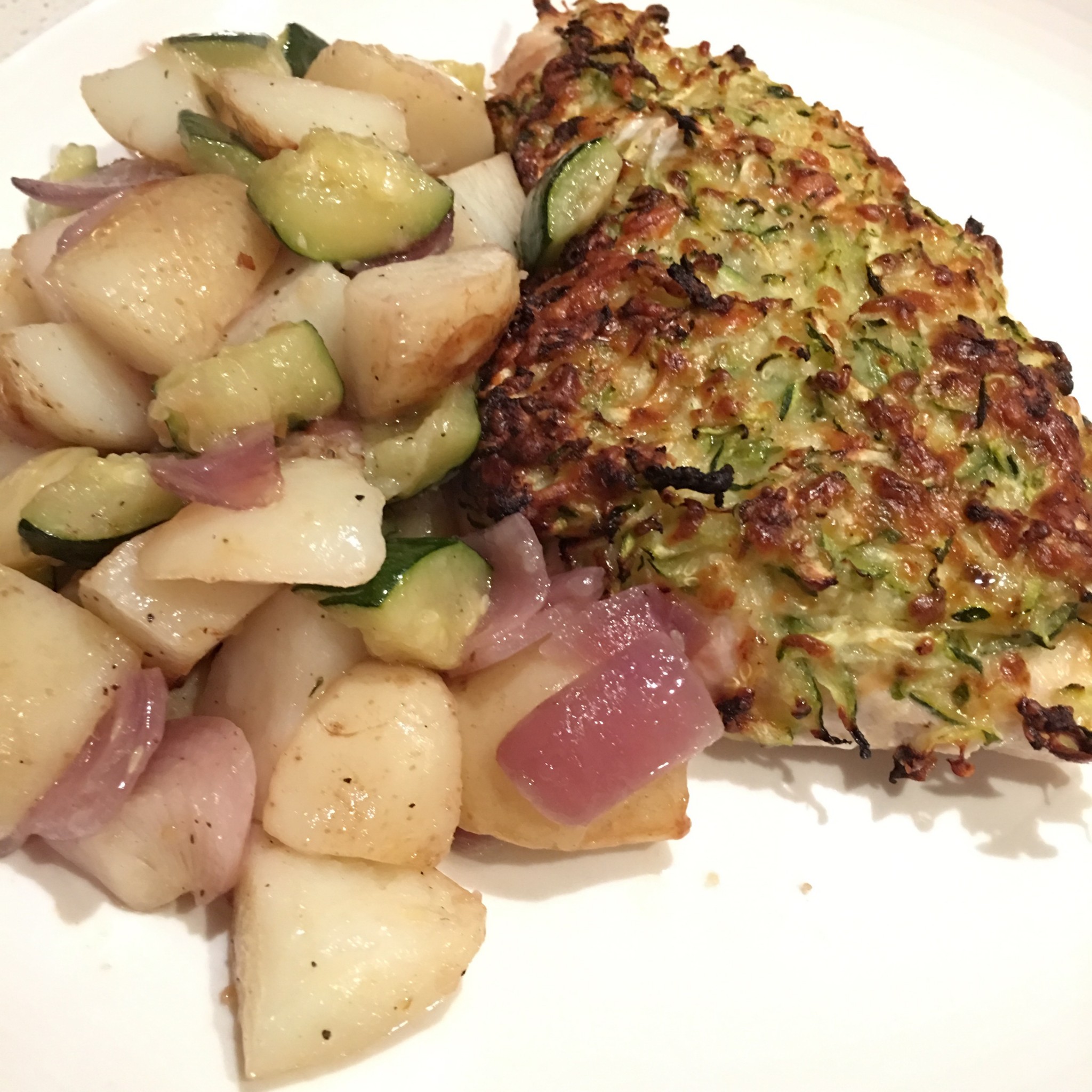 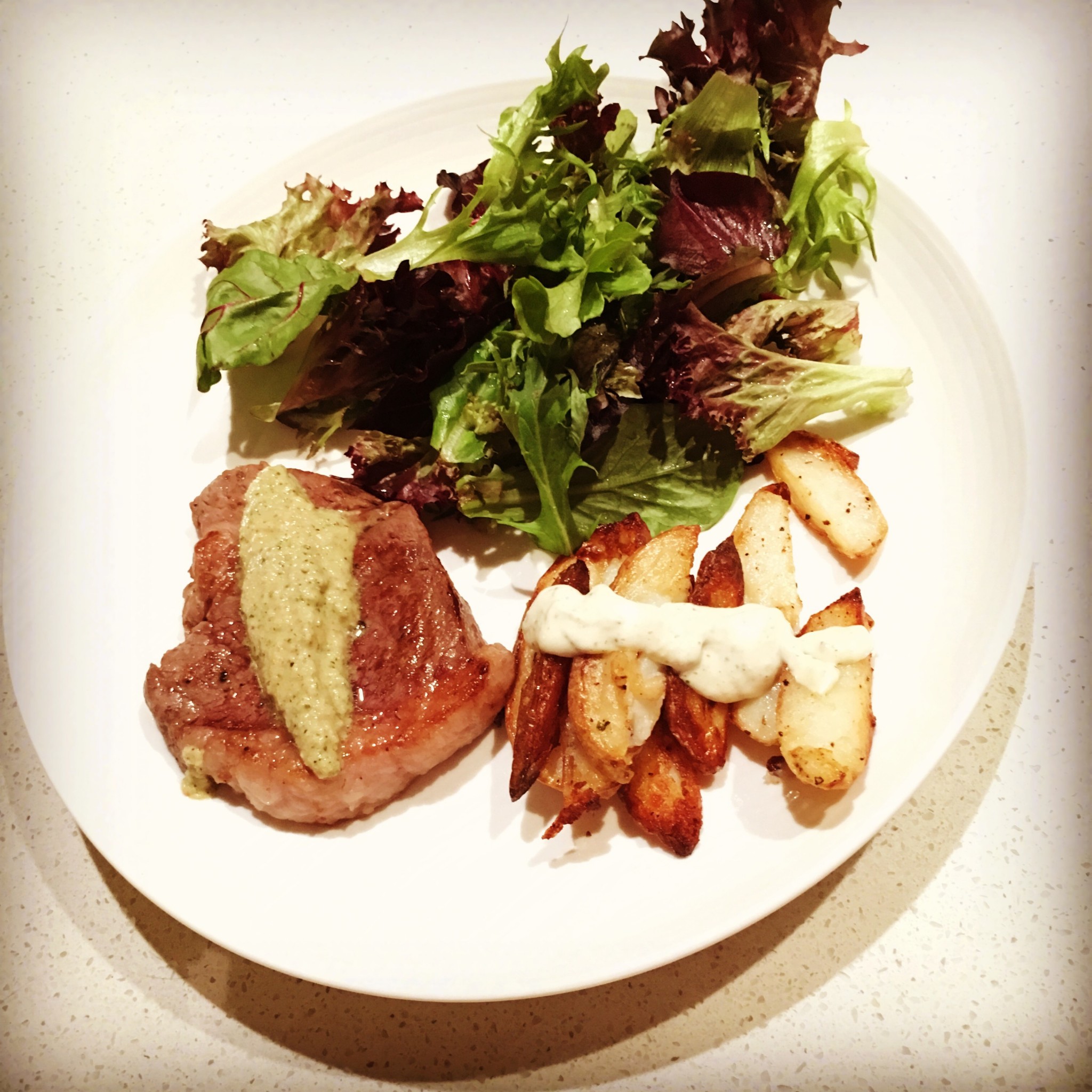 I’ve not had to substitute or swap out any bad produce although as I’ve said before aesthetically I’ve been a bit challenged from time to time.  There was that week that seemed to short us around 200g of potatoes but in the execution there wasn’t an issue – besides who needs those empty carbs 😉 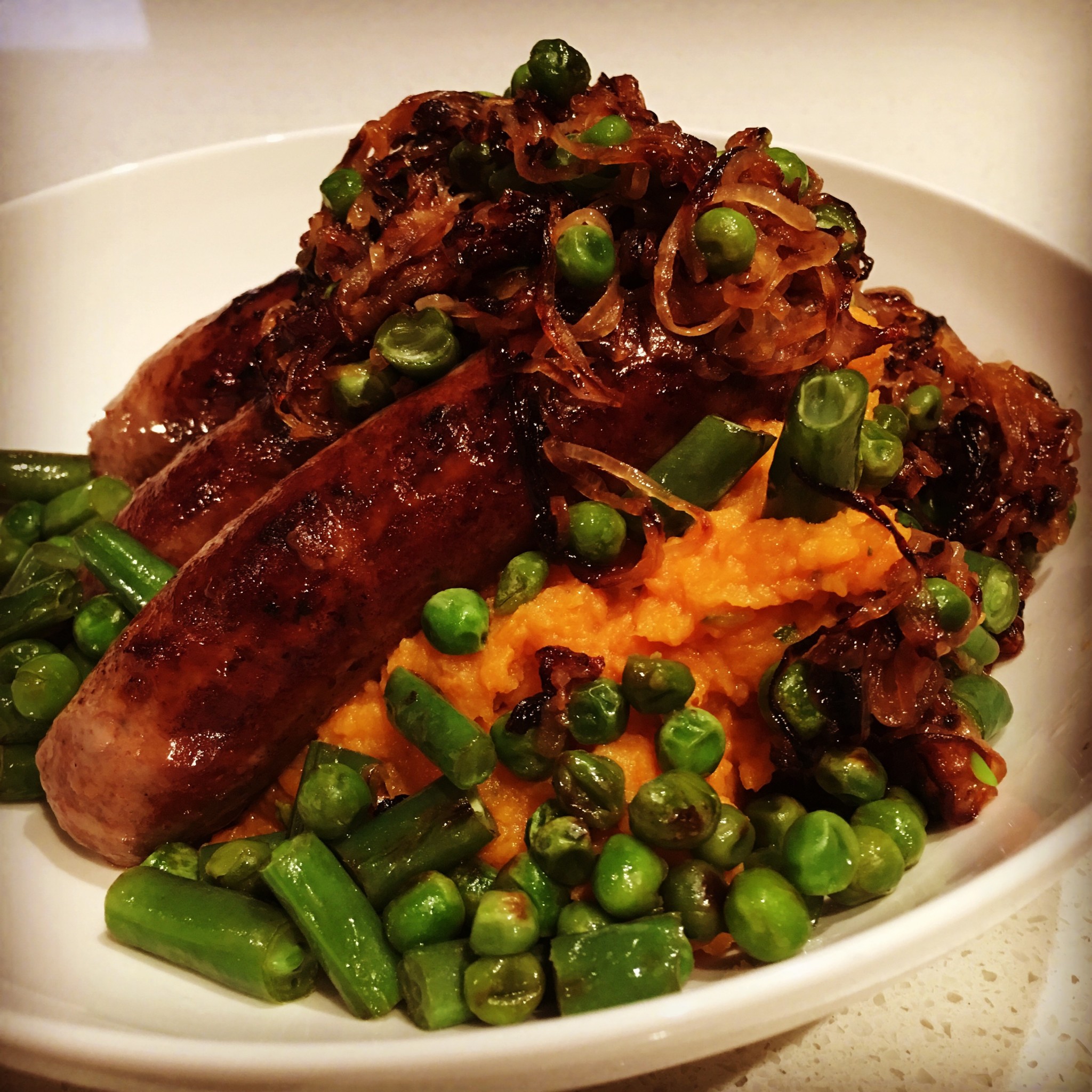 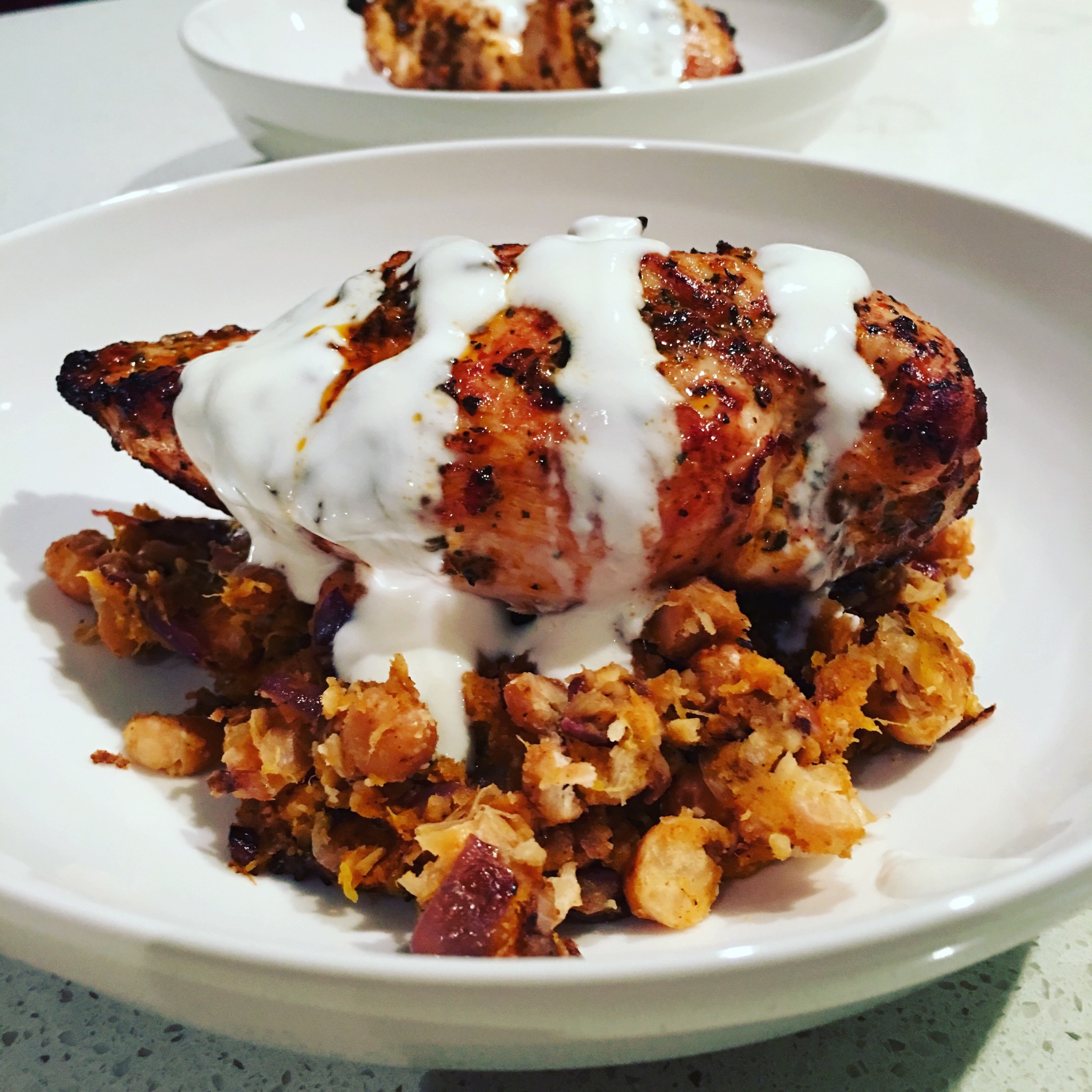 We have both been happy with the quality and variety of meals, that said possibly the past few weeks have had a greater degree of “it’s ok” items but here in Australia we are also in the difficult transition from Winter to Summer which really skews the appetite and cooking desires.

I think the fact that we continue to depend on the service and haven’t run off to Marley Spoon or other competitors says it all.  Although I’m tempted just to try! 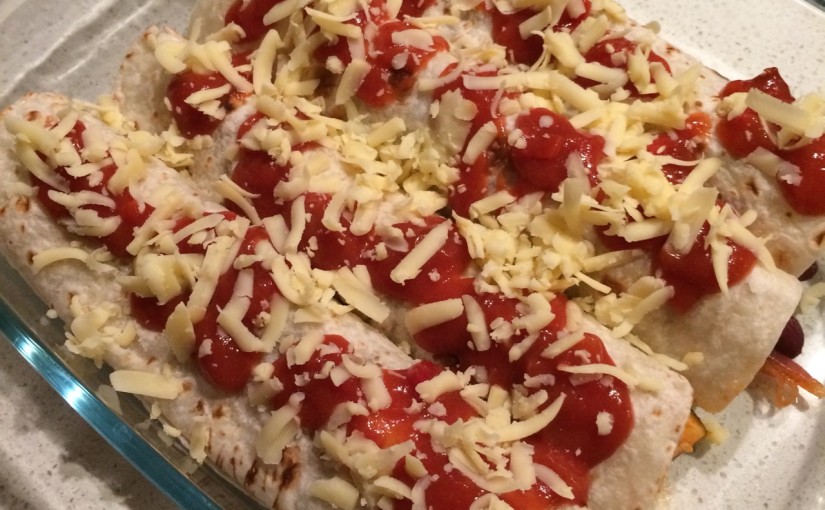 I’m a omnivore, no debate, no argument, as far as I’m concerned meats are on the menu!  So then why am I writing about the HelloFresh Veggie Box?  After all didn’t you just see me write about a box containing all the good meaty things?

Well sometimes the magic that is HelloFresh doesn’t offer a mix of recipes to taste and as a customer you may either “Pause” that weeks delivery OR you can switch the order.  For our second week with HelloFresh we switched the order to the Veggie Box.

What’s in the Box?

On first glance the box is almost bursting with vegetables.  The packaging is good enough to have prevented any major damage.  On the freshness and quality front I’d say the produce was good. 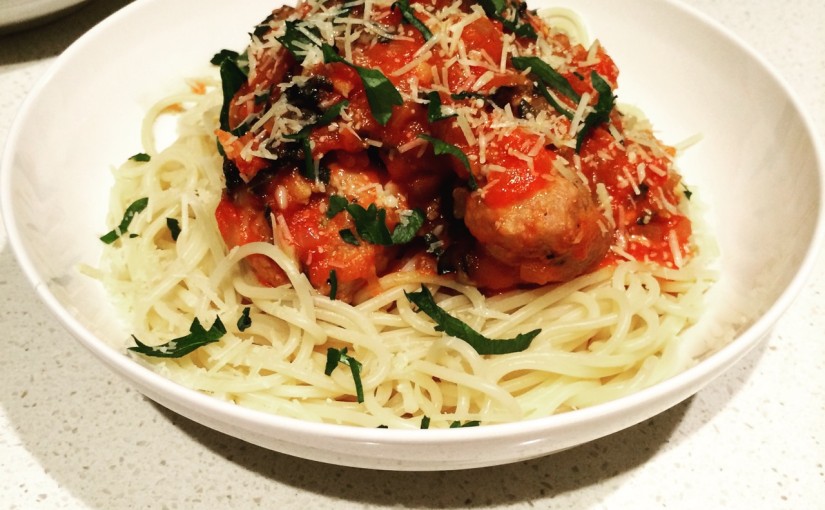 Included in “the box” are recipe cards for the ingredients, they’re also available online at their website in PDF format.  This is our third meal from “the box” after the North African Lamb Tagine and Pepper Crusted Steak with Warm Potato Salad posted previously.

The recipe was straight forward as previous experience has led us to expect.  The pre-prepared mince joined an array of ingredients that did need some preparation.

When it comes down to it preparing this dish is quite simple, there’s a few steps but with only two saucepans at play it’s hardly a challenge.

The instructions are very clear and provide incremental timings which deliver a good result.  I probably could have halved the size of the meatballs (I divided the mince as directed) and added a bit more Golden, Brown, Delicious to them but for the initial few boxes from HelloFresh we’ve trying o be sticklers for the recipes!

I found it a little hard plating, pasta just doesn’t seem to want to cooperate or be photogenic so there’s only the single photo. 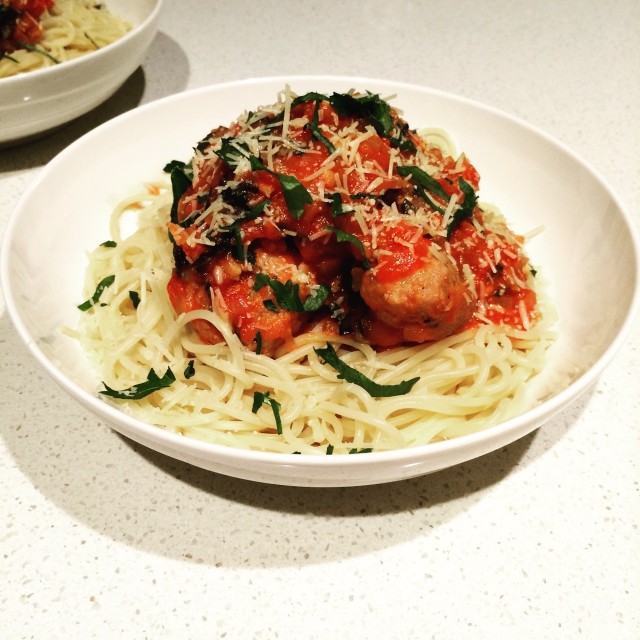 In summary it was an interesting diversion from a regular bolognese and reasonable value at the $11.50 cost.  It wouldn’t be hard to reproduce this recipe for about half that price, but you’d be having to make about 6 portions to do it!

Included in “the box” are recipe cards for the ingredients, they’re also available online at their website in PDF format.  This is our second meal from “the box” after the North African Lamb Tagine posted previously.

The recipe is simple enough and in some ways hardly imaginative but was also the first meal where we needed to supply some of our own “pantry items”.

Pepper Crusted Steak with Warm Potato Salad brings a few more parallel cooking functioning into play.  While the oven roasts the quartered chat potatoes a pot simmers away ready to blanch the sugar snap peas just before serving.  Meanwhile the steaks (a rather thin piece of rump) gets a single side coating of crushed peppercorns before hitting the pan.

The instructions are very clear and provide incremental timings which deliver a good result.  To my taste the steak could have been a bit less “done” although this is more a function of thinner cuts then perhaps first anticipated by the HelloFresh crew.

Laying out on the plate the meal looks good with the vibrant colours of the salad contrasting the peppery char of the steak.

The warm potato salad is really the highlight of this meal, the steak itself was fine, but we all know what a piece of peppered steak is like don’t we?  The salad had crunch from the sugar snap peas, a little bite from the shallots and the aromatic dill carrying though the buttery smoothness of the roasted potato.

Some other reviews claimed there’s too much pepper on the steak but that’s something under the control of the chef so I don’t know why they ended up with more than they liked when they put it on in the first place!

In summary it was a good, filling meal that met with the expectation raised from the AUD11.50 per plate cost.  A minor downside was that the cuts of rump steak were not the best I’ve seen. 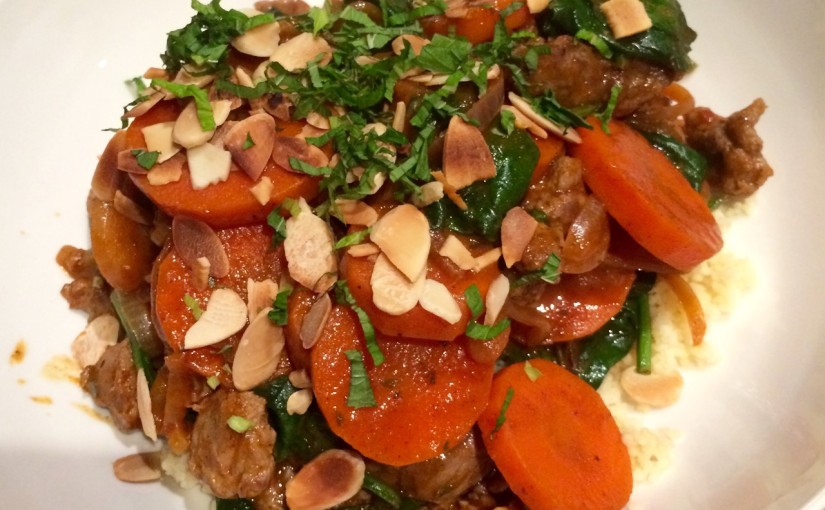 Included in “the box” are recipe cards for the ingredients, they’re also available online at their website in PDF format.  Our first meal was “the lamb”, chosen for no other reason than the expiry date of the lamb itself was closest.

The recipe looked simple enough and the ingredients far from exotic, but still there’s a comprehensive level of inclusion, things that we’d probably not buy if shopping for this meal ourselves.  The small amount of mint to garnish for example, or the slivered almonds, these are things that cannot be bought in such small quantities normally and end up lurking in the panty until cleared out long beyond their sell-by date.

The instructions are very clear and provide incremental timings for most steps allowing even the most naive kitchen user can get a good result. 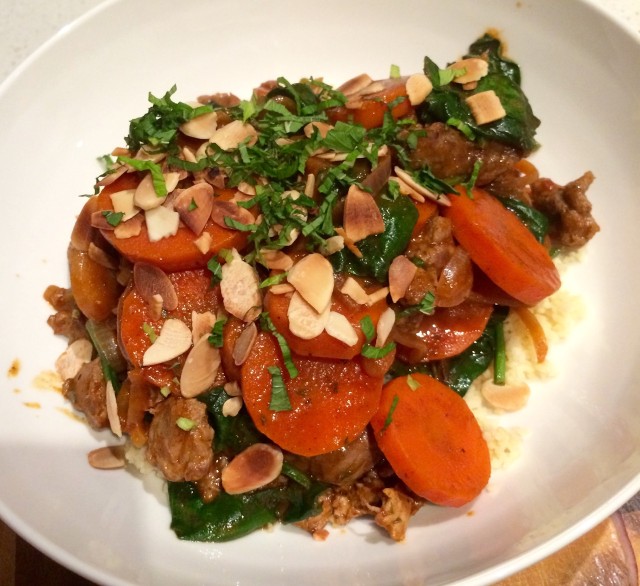 Nestled on the bed of couscous, sprinkled with the garnishes of toasted almonds and chopped mint I’m very impressed with how similar to the sample photos this looks.

While I don’t always go-to-town on presentation when cooking I’m very aware that we eat with our eyes first and putting in some effort does make a massive difference.

At first bit the combination of textures is good, theres still some firmness to the carrot while the lamb is tender.  The crunch of the almonds breaks up what could have been a very stew-like meal.  Mixing through with the couscous changes the texture again.

The seasoning could have more kick, but reading other reviews online indicate that the Hellofresh team have to be everything to all people and in this case have chosen a good middle ground.

In summary it was a great tasting, filling meal that met with the expectation raised from the AUD11.50 per plate cost.

Several weeks ago a little card arrived in our mailbox offering a 50% discount on the HelloFresh food delivery service.  While the website promised “everything but the chef” we were still skeptical, would, or could, a home delivery produce service really live up to expectations?

I’m the kind of person that will agonise over the choice of every individual piece of produce I buy, secondly we both know what we like and dislike (or have a physical reaction with) so obviously we were needing to concede some control to the HelloFresh team.

We were really looking forward to the arrival of “the box” on Tuesday and during  the afternoon it mysteriously arrived at our doorstep.  This was the easiest and least stressful grocery shopping I’ve ever done!

We quickly opened it and explored the contents.  As you can see from the pictures below pretty much everything is labelled, packed and portioned for HelloFresh customers to match the included recipe cards.

Overall I’d say we’re happy with the quality of the produce, nothings been rotten, cosmetically challenged or not fitting with the claims of freshness.  Looking through he HelloFresh social media presence indicates that from time-time quality can drop the ball.  I’d expect this is largely due to inattention of the packing team and not a deliberate outcome.

We signed up for the 3 meal, 2 people deal.  So while we may have thought on unpacking the box that “there’s not a huge amount of food here” a lot of the questions would be answered by cooking up the included recipes and seeing how they delivered.

When listed they don’t sound like culinary adventures, but I’ll throw it back to a bigger question, how often do you cook something different through the week?  In many ways I’m hoping the box provides inspiration to bring more variety into my kitchen and breaks some of the “it’s easy to throw this together” habits of old. We shall see!